Dining Out Becomes the Hot Seat 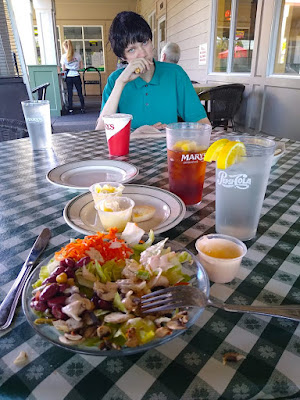 A few weeks back we our temps hit the hundreds, which is pretty danged hot for our area. We do not have a/c in the new place, so James and I supported a local restaurant by doing some early patio dining.

We wore masks until it was time to drink and eat. For most of the meal, we were alone. Then the few other available tables filled. Inevitably, someone brought their dog to dine out with them. Two, this particular evening.

So James noticed right away and started getting nervous.

I get both his reactions and the presence of the dog. I grew up with dogs. I've been bitten by a strange German Shepherd dog that came out of nowhere and almost caused me to get rabies shots until the person "watching" the dog came forward. I learned to recover my confidence around dogs. James and countless others like him have not.

Dogs are the new kids. I am pretty sure, however, that there was a "no dogs on the patio" sign at the restaurant.

We were suddenly in the hot seat. I made the call to box up our stuff to go. I get tired of this.

PS: The food was delicious.
Posted by SoCo mom at 4:51 PM No comments: 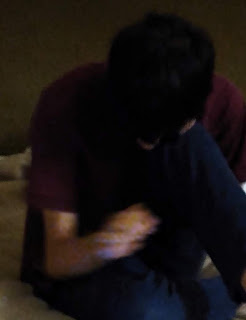 James has been triggered by what most people consider every day sounds: dogs barking, vacuums, leaf blowers, hair dryers, edgers, trimmers, young childrens' voices and crying. His behaviours and scripting kept him out of program even before COVID-19 hit this year. Goal: Work on lessening the impact for better social integration.

Practical: We now have our own home instead of being in the apartments at a busy cross street. James has headphones that he can use. I and his support crew are providing more "expected" scriptings he can use to communicate his discomfort and displeasure. We have started meds for anxiety.

OMG, yes - we have started meds for anxiety! (there is dancing going on, offstage.) ABA, O/T, and his psychiatrist have all ganged up on him with the most positive of support. It's made a huge difference, along with the new meds having a milder taste and smoother emotional ride, so to speak. 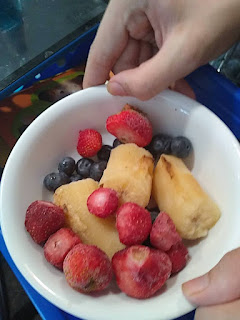 I got so happy, I made blended gin fizzes the following weekend. 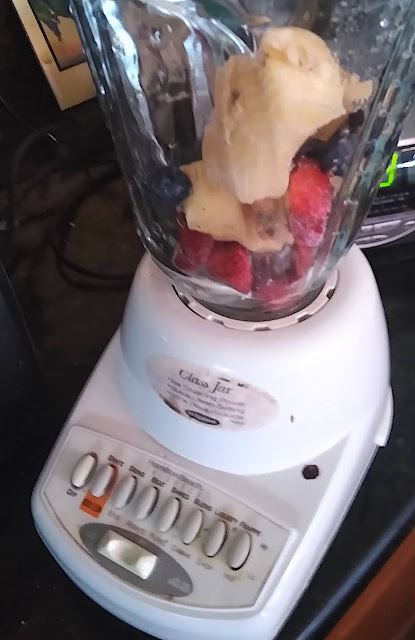 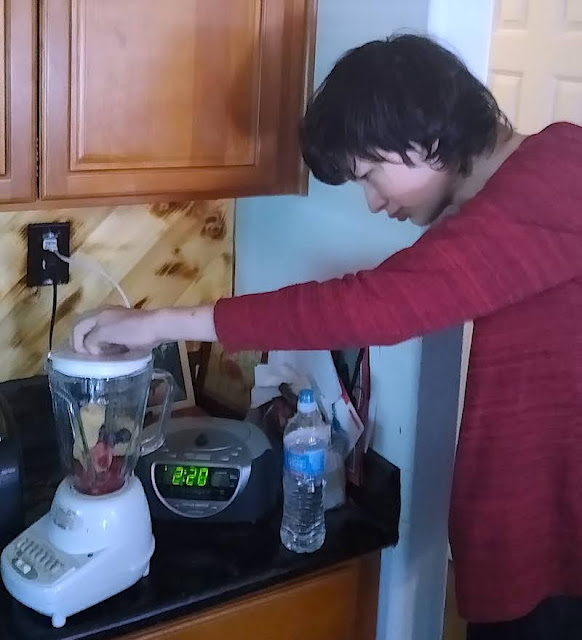 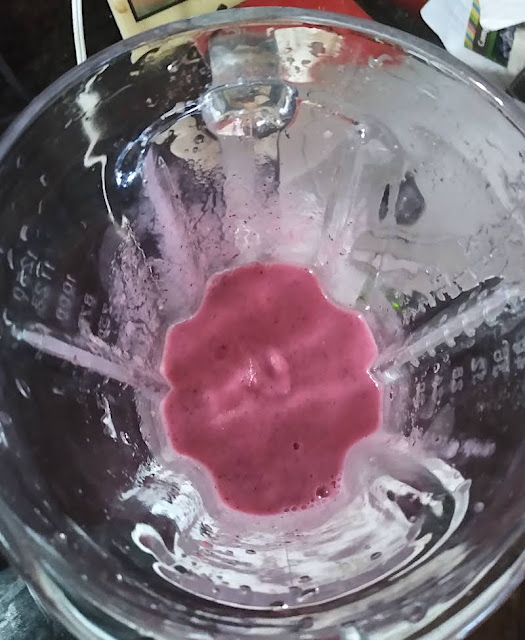 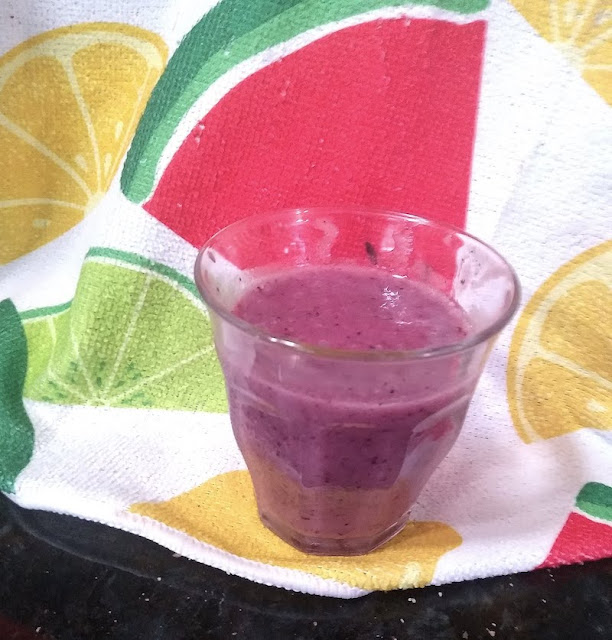 Here's to summer!
Posted by SoCo mom at 7:59 PM No comments:

I am really enjoying traveling the back roads, getting to see the country in summer with James. James is too. Road trips are our quiet time to just be together, getting out of the house and into life, away from getting stuck in our own heads. When I told his O/T about this, he mentioned they were good for James vestibular integration. Best of all, it's not impacted by COVID-19, as we do not get out of the car. 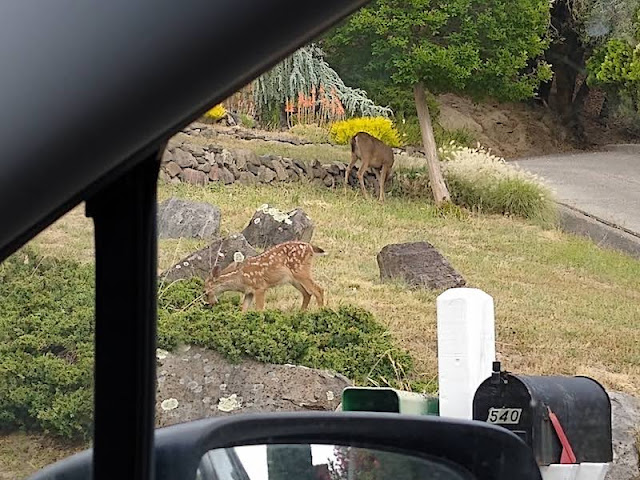 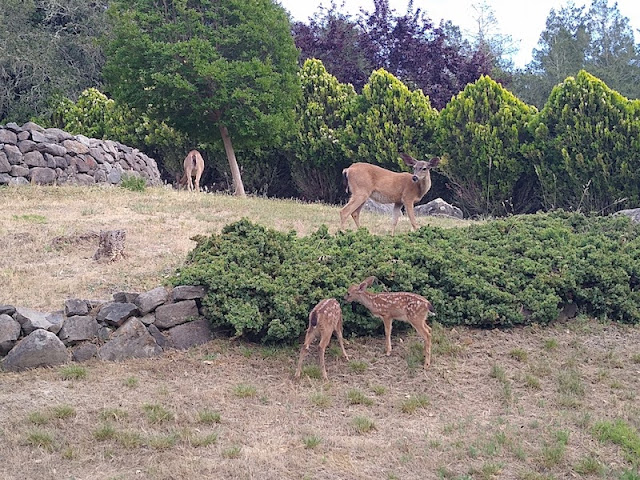 What started it all - going to "see the deer" at Deer Hill South.

We have been dealing with heightened anxiety behaviours at school, in public, and at home for over half a year now. The OCD touching things and incredible time it takes for him to go anywhere (out of his room, down the hall, into the car) have gotten a lot better. We are getting more into a routine of getting him back to doing chores and then doing something he enjoys, like going for a drive. 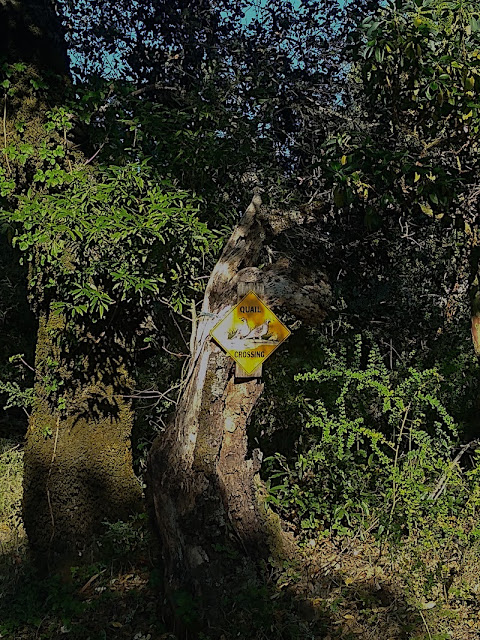 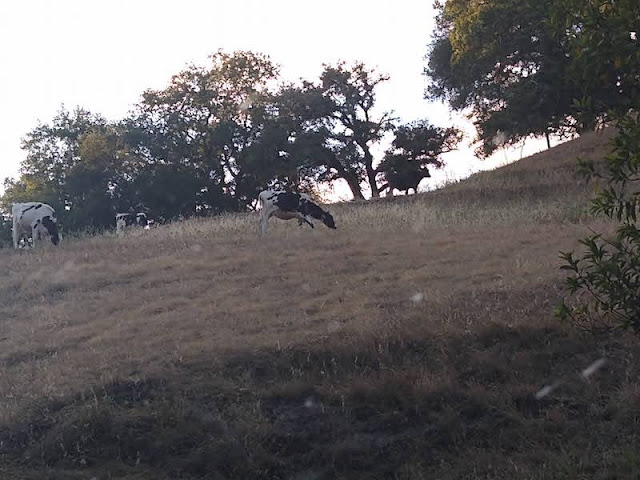 We make our drives into our own little games. I call it Discovering New Roads. James likes seeing "bonus" animals, such as skunks, possums, and bats for out night drives and quail, white egrets, hawks, cows, and coyotes on our day ones. 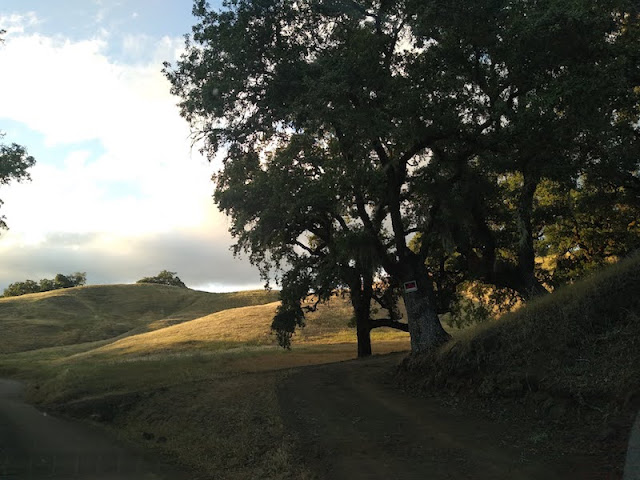 My "bonus" sightings are the beautiful countryside and nature: 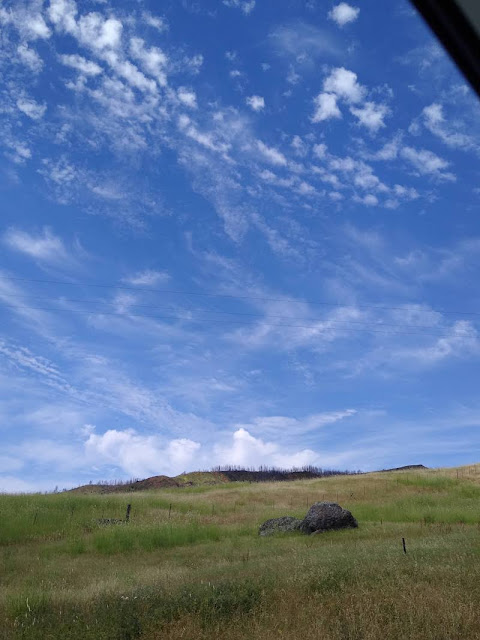 It was four years ago today that I decided we should take advantage of summer in California and get out in the gorgeous weather and scenery. James loves the Golden Gate Bridge, and I was missing the SF Bay Area of my years growing up. We talked my friend into coming along for the drive and we all zipped in my car down 101, drinking it all in. 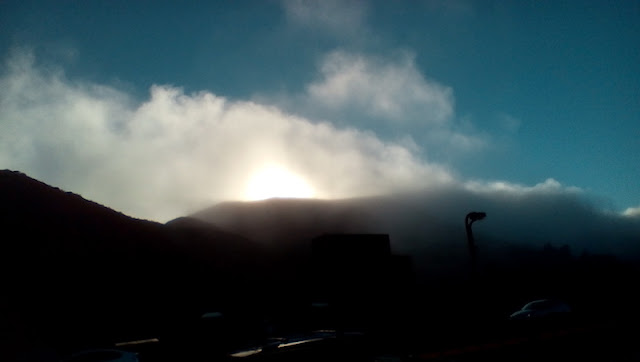 At the bridge, the fog was boiling over the coastal hills and blowing through the gate, but there was no fog horn. James LOVES the foghorns on the Golden Gate Bridge. We walked a bit on the bridge. When the fog is coming in, however, the wind can make is hard to stay upright. 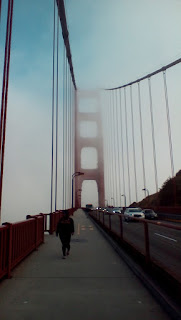 A guard saw us and came over. I explained that James was hoping to hear the foghorn, and asked what triggers the foghorn, because we could not see across the bridge because of the fog. He kindly explained that the fog has to be socked in low on the water before the foghorns turned on. He was watching James as he danced about in the fog, and he could tell there was something special about him.

"I tell you what," he said. "I'll radio to the engineer to go flip the switch and turn on the horn." Wow! Really? They could do that? No trouble at all, he assured us. It would take about 15 minutes for the engineer to get to the control room and get things started. We thanked him many times. James decided he wanted to head back to the car, so we did.

We pulled up to the first turnout on the Headlands side of the bridge, looking at the cool, roiling, silent fog that already hid the entire bridge from view. A few minutes later ... the fog horns began. Just for James. I will never forget it. 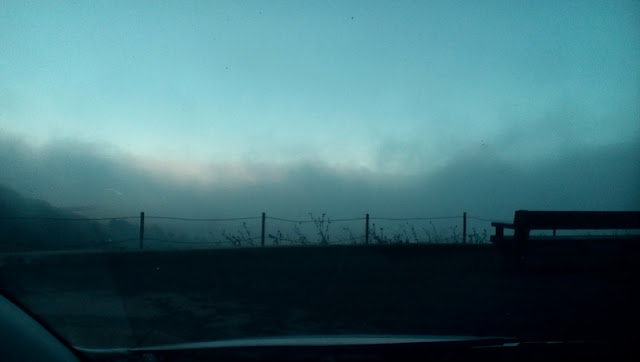 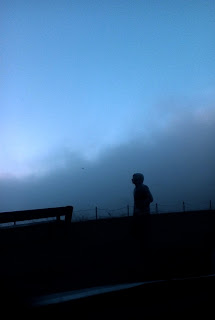 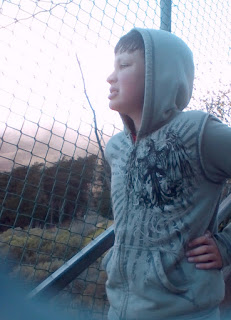 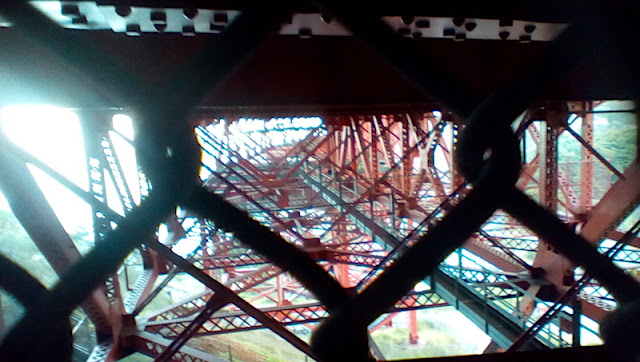 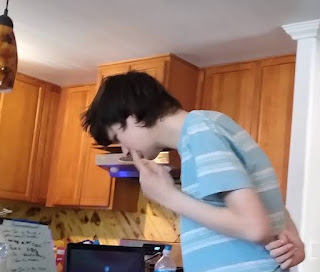 James clarified this was not actually the case, relieving his mother's anxiety. But not the perplexity.

Often James' inner dialog becomes an audible monologue. At best, it's confusing with an occasional delight of Dada.

At it's worst, it's the unconscious zingers driven by emotion and tempered with nothing. There are no filters and it has caused trouble at school, social groups, and with his sister.

The only occasional silver lining is that if I listen, I can get a bead on what is going on with James without discussions that are often frustrating, because the topic is abstract, and James does not want to get into trouble.

It's also better than a nannycam - because if he's been watching rant videos on YouTube, it comes out, scripted, in the monologue.
Posted by SoCo mom at 1:54 PM No comments:

We live in a beautiful art of the world, where there are also many roads to explore. James and I are having fun expanding our looking for deer (the moms and new fauns are out now - it's adorable!) to discovering where that side road goes that we are usually too busy to explore. 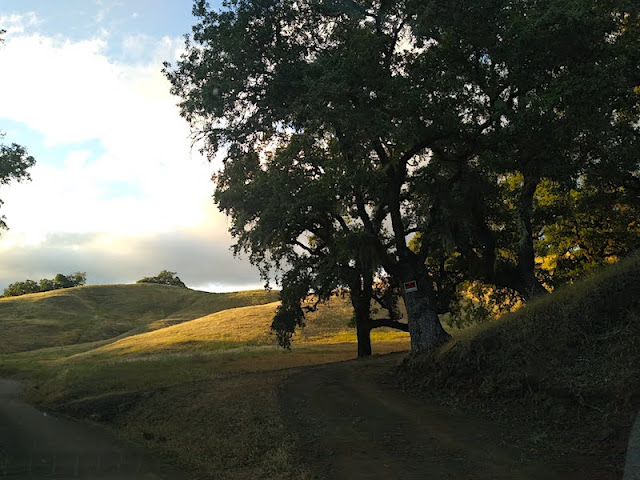 This week, James wrapped up a good week's work and wanted to drive along Westside Road. It's a pretty Sonoma County country road, full of curves, dips, farmyards, vineyards, and old country homes. Scenic and relaxing.

Part of the way there, I caught side of a side turning we'd noticed before. "Want to see where that road goes?" I asked. James said "Sure!", and off we turned, onto Sweetwater Road. 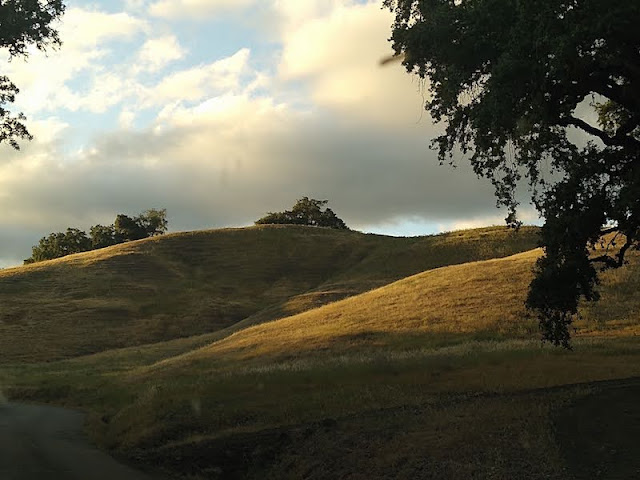 It curled away from the main road, between the folds of rolling hills, lichen-decorated boulders growing out the ground, shaded by shaggy California Oak trees and wandered past cows grazing impossibly on steep hillsides, ridiculously close (for us city slickers) to the road. 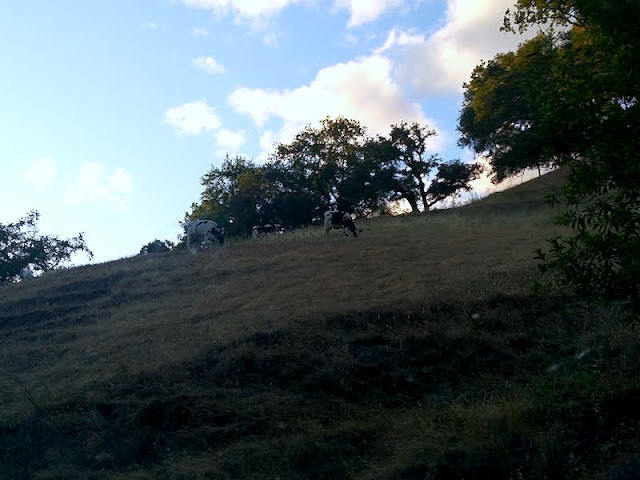 The car tires thrummed as we crossed one cattle crossing grate after the other. California quail scuttled and fluttered in front of us, crossing the road in the late afternoon sun. I drove slowly and carefully, as the road was narrow and winding, and much patched in places. 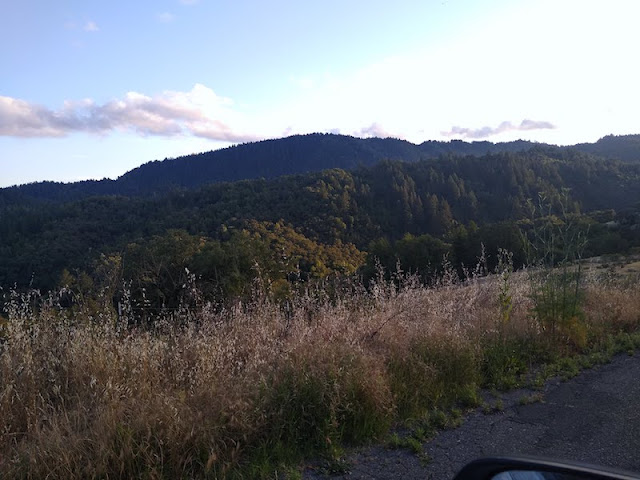 The road crested a hill and dropped us down in a valley, where just like that, we were surrounded with ferns, dense redwoods, shadow, and  running next to a creek, fed by deeply grooved channels in the earth, running down to meet it. It felt like entering Mirkwood, and I told James so. 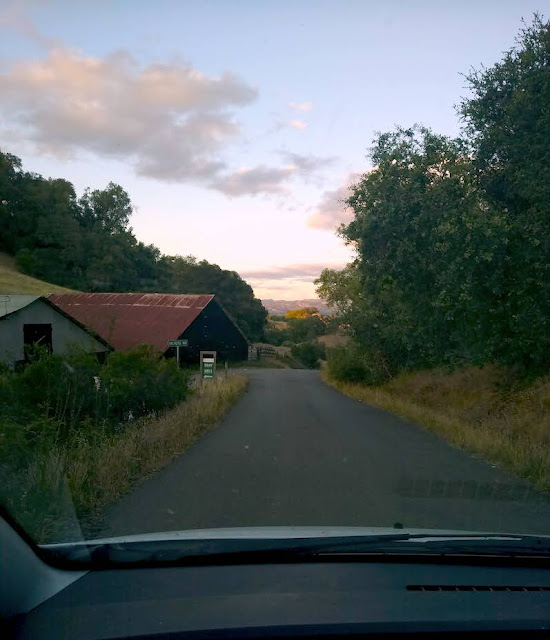 Unfortunately, we did not have enough daylight to follow the road to its end. We plan to try again this weekend. 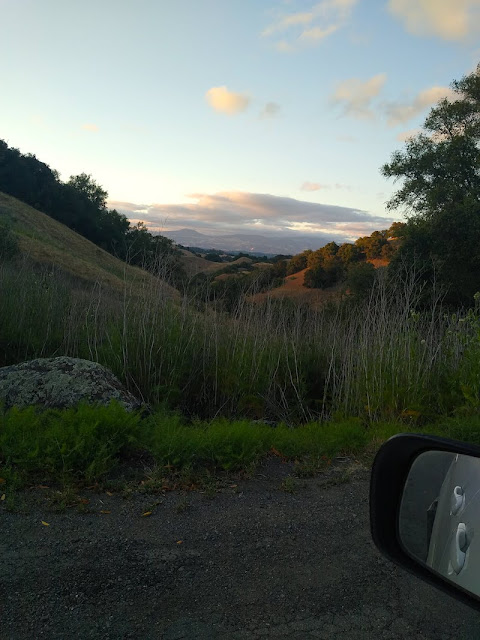 When Remote Is Better

So, full disclosure: my mileage for most parental and family things has so much variance (how much variance?) ... so much that one can call Ollie-Ollie-Oxen-Free over to me at the extreme range of Autism Lifestyle - that's how far out there I am. 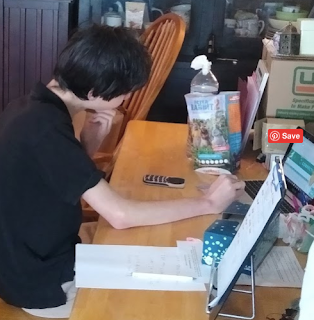 So, the shelter in place as a result of COVID-19 has been - kind of a godsend. My life has SLOWED.

I see benefits for James as well:
I give a million kudos to his teacher and support staff at his school. They have been consistently upbeat, accessible, calm, kind, and encouraging. They make our world a better place.